I’ve had a busy couple of freelancing years and rarely seem to take the time to talk about what’s keeping me busy outside of some scattershot mentions on social media. Let’s rectify that a bit. 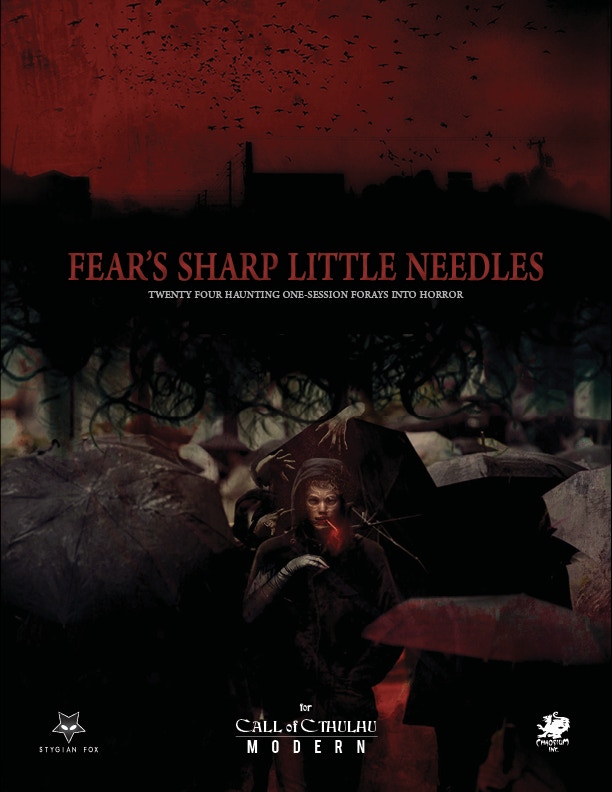 As I write, Stygian Fox Publishing’s Kickstarter for Fear’s Sharp Little Needles is underway, ending on March 1st. Recommended for mature audiences, the book is a collection of more than twenty modern-day micro-scenarios for Call of Cthulhu. They’re intended for Keepers to easily pick up and run in one session. The publisher’s previous CoC book, The Things We Leave Behind, has been very well received, and this Kickstarter is far past its initial goal, with more stretch goals waiting to be unlocked (including a PDF fiction anthology for backers). As an author involved in this, I’m in great and varied company. “Waiting To Be Born” is by far the shortest scenario I’ve written (by about a third), which was an interesting challenge.

On the opposite end of the length spectrum, I recently turned in a fifty-thousand-word first draft to a publisher. This, then, is by far the longest thing I’ve written (albeit a campaign of six linked scenarios rather than a single one). The word count provided its own interesting challenge, and I suppose, no matter the length allowed, it never seems quite enough. My outlined research notes alone came to about twenty thousand words. Of course, few of those words directly made it into the draft. Nonetheless, being able to refer to that (thankfully searchable) outline was a great benefit. Even if something I gleaned from a fictional or nonfictional source didn’t make it directly into the campaign, it all provided a foundation, even in its absence or allusion.

I fell in love again with outlining my research notes while working on an article for the upcoming Kingsport issue of The Arkham Gazette earlier this year, using nested bullet points to organize the information. While that article is only eleven thousand words currently, I dived deep into the source material, W. H. Pugmire’s tale “The Fungal Stain” and the many HPL and REH stories that inspired it. Following are a couple of examples pulled from that outline.

Riveting, eh? There were a couple of other writing projects I was involved with over the course of 2016, as well as some others pending, including some more possibilities with publishers I’ve never written for.

My Appearance on the Miskatonic University Podcast

After writing my three-part series on Lovecraft’s racism, I was invited to participate in a long-awaited special episode of the

Miskatonic University Podcast., which aired on January 12, 2017. The discussion between me and Keepers Chad and Jon centered around Robert M. Price’s controversial opening remarks at NecronomiCon 2015, wherein he presented his perspective on jihadism and political correctness by drawing on Lovecraft. We attempted to provide context and analysis of the meaning of Price’s words, as well as some of their repercussions at the convention. I appreciated being asked to join in on what I hope was a valuable and interesting discussion.

This has been my focus for the last few years, and I’ve written an occasional scenario or article during that time. Last year, I copyedited the first three releases for TimeWatch, Pelgrane Press’s GUMSHOE game of time-traveling agents protecting the universe from chronal disruption. I also provided assistance with part of Cthulhu Confidential, the first GUMSHOE One-2-One game. Unfortunately, I was unable to fit the entirety of that book into my schedule. As you might surmise, my focus flipped over to writing at the beginning of 2016. There are many reasons for this change, but a crucial one is simply time. As with many freelancers, that work is not my only source of income. I currently work full time for the county library, which provides both stability and a career I love. I realized that maintaining steady copyediting work under those circumstances wasn’t working–not if I wanted time for anything other than work, no matter how enjoyable. So, I made the difficult decision to take an extended hiatus and focus on writing. Anyway, on to the future–it keeps coming, no matter what we do.