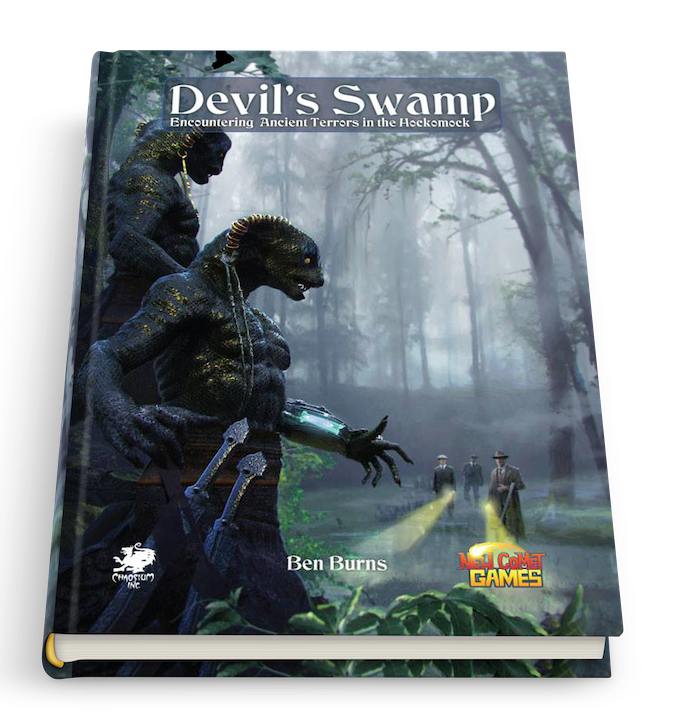 I am part of the Kickstarter campaign for Devil’s Swamp, a Call of Cthulhu supplement based on the Hockomock Swamp from New Comet Games. The $20,000 stretch goal adds a scenario written by me to the book. At this moment, the campaign has just passed $17,000, with 18 days remaining. I expect the campaign will surpass the amount required for my inclusion in the finished book, but you never know. And there are far more stretch goals after mine, including unannounced writers. The stretch goal to include a scenario by Brian Courtemanche has already been reached. Take a look, and, if you are so moved, join in on making this a reality.

Announcement of My Upcoming Campaign

The big news during the Campaigns for Call of Cthulhu panel at NecronomiCon this year was that Masks of Nyarlathotep, one of roleplaying’s most famous campaigns, will get a significantly updated and expanded edition, shepherded by Mike Mason with the help of a stellar group of writers, Lynne Hardy, Paul Fricker, and Scott Dorward.

Of much more minor note was the announcement of my own campaign for Pulp Cthulhu, A Cold Fire Within. The campaign should be out at some point in 2018, and there will be more to say about it in due course.

Release of the First Kittycat Lollipop Single on Bandcamp

From 2005 to 2009, I created and performed music as part of kittycat lollipop, a strange mix of often upbeat electronic music and darkly surreal lyrics. These were in the days when MySpace dominated the music scene, and, while kittycat lollipop never garnered much attention, we connected with fans and like-minded bands around the world, as well as confusing local audiences with our live performances. I was busy enough with it that I left RPG writing for a few years. After having a number of RPG projects fall through, I chose to concentrate on the creative pursuit that was actually going somewhere. Eventually, kittycat lollipop came to an end, and I returned to RPGs fully when I jumped at the chance to work with Keith Herber, a writer and editor I greatly admire, on New Tales of the Miskatonic Valley. In 2010, Strange Aeons II finally saw publication, eight years after I wrote my scenario for it.

I performed for the first time in six years a few months ago. My partner in kittycat lollipop was in town, and we both played solo noise sets. Certainly, having something of a reunion put me in mind of those days, so I’ve decided to start putting our songs up on Bandcamp for those who fondly remember them or those who might want to come to them with fresh ears. The first single is up now, and it can be downloaded for free. The band page also has links to YouTube videos based on the films that were sometimes projected at our performances.