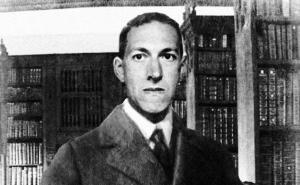 Whenever Lovecraft’s racism is discussed, a common point made is that, had he lived longer, his beliefs may have evolved along with society in general’s. Certainly, we can’t know for sure what Lovecraft’s perspectives would have become, so it’s difficult to either accept or reject this speculation outright. And he did shift his views on any number of subjects, including matters of politics and culture. But I don’t believe his racism would have diminished anywhere near as much as some people hope.

The idea that Lovecraft would have become less racist isn’t the dismissal of the subject that saying Lovecraft was simply a product of his time is. Often, that argument is an attempt at a final word–the late 19th and early 20th centuries were inherently racist, so Lovecraft naturally was; therefore, castigating him for his views is pointless.

Instead, the theory that Lovecraft would have changed continues the conversation at least a little longer. It is generally made by someone grappling with their admiration for a writer who held repugnant views. It is borne of the hope that Lovecraft was capable of becoming better.

I can appreciate this hope. Finding out that someone we admire holds beliefs diametrically opposed to ours can be upsetting. If we regard someone as a hero, we want them to be wholly and fully a hero. But in reality, people are complicated. They can and will embody things we agree with and cherish, along with things we find ugly and disappointing. It’s up to us to decide, on balance, whether we admire them still.

One idea used to bolster the position that Lovecraft would have changed is that he had already done so to some degree. In his later years, so this notion goes, he moved incrementally away from the more shocking written declarations of his younger years. My perspective is that the nature and expression of his racism, including his rationale for it, changed over time. But the bigotry didn’t really diminish or soften.

Lovecraft left behind an incredible amount of writing, and this is from where we can draw many of our conclusions regarding the degree and character of his racism. His fiction reveals his racism in a number of ways, often minor and often easily missed. If that’s all we had, we might indeed think of it as a product of its time. But we have his letters.

So far, at least twenty thousand of his letters have been recovered (and that’s apparently only a fifth of what he actually wrote). In recent years, scholarship on Lovecraft and the publication of a number of these letters have revealed more and more details to an audience hungry for them. Correspondence and juvenilia that might otherwise go unnoticed become record. Lovecraft would be astonished by this. He didn’t expect his stories to survive him, printed as they were in disposable pulp magazines, let alone letters to friends. 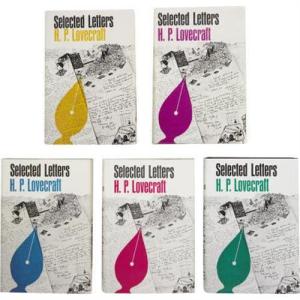 The original five volumes of selected letters, a mere smattering. Many specialized volumes, focusing on correspondence with certain people, have been published since.

Of the things uncovered that shed a brighter light on his racism, one of the earliest and most upsetting examples is not a letter but a poem, written in 1912. The title alone gives you a good idea of what you’re in for: On the Creation of Nxxxxxx. [Edit 09-12-22: I have redacted the horrible title here. Be advised that following the link or simply looking at the URL will show the expected slur.] I argue that this poem is more baldly racist than any of Lovecraft’s stories, including “He” and “The Horror at Red Hook.” Some have pointed out that paying attention to the poem is unfair–it wasn’t published in his lifetime, and it isn’t a mature work. And indeed, few people knew about it until recently, including his fans. But this is the downside to increasing awareness of an author. The poem survived; and, with the Internet, it is easily sought after or stumbled upon. I don’t think we can dismiss it as a youthful indiscretion. He was twenty-two when he wrote it, which hardly makes him a child. While he may not have written anything quite like it in the remaining twenty-five years of his life, he wrote plenty in public and private that reveals his racism.

As I say, his letters, thousands of which have been published, highlight his thought and its development and changes over the forty-six years of his life, including his racism. I certainly have not read all of the letters that have survived, but, between the ones I have and various biographies and essays, I think I have a good handle on him. And I definitely don’t need to provide mention and analysis of every single one of his statements regarding race that I’ve read. We’ll all be here a long time if I do that.

The married couple walking in Brooklyn

In 1925, thirteen years after writing the infamous poem, Lovecraft married and moved to New York. The initial excitement of the new city and larger circle of friends soon wore off. A large portion of his dissatisfaction came from being surrounded by foreigners, Jews, and Black people, and he expressed it strongly in letters during and after the time he spent there. In January of 1926, while still ostensibly married to his Jewish wife, Sonia Greene, he wrote the following in a letter to his aunt Lillian Clark:

The mass of contemporary Jews are hopeless as far as America is concerned. They are the product of alien blood, and inherit alien ideals, impulses, and emotions which forever preclude the possibility of wholesale assimilation . . . . The fact is, that an Asiatic stock broken and dragged through the dirt for untold centuries cannot possibly meet a proud, play-loving, warlike Nordic race on an emotional parity . . . . Two elements so discordant can never build up one society–no feeling of real linkage can exist where so vast a disparity of ancestral memories is concerned–so that wherever the Wandering Jew wanders, he will have to content himself with his own society till he disappears or is killed off in some sudden outburst of mad physical loathing on our part . . . . Superior Semites . . . can be assimilated one by one by the dominant Aryan when they sever all ties of association and memory with the mass of organized Jewry.

He goes on to talk about how disgusting and unassimilable various other “races” are (though the “Nordic Irish of Eastern Ireland and such of the French-Canadians as are of Norman extraction” may assimilate after a very slow process).

For Lovecraft during this period, other races were scum both physically and culturally. And genetics and history inextricably intertwined with each other (note the references to “ancestral memories” above). Race was a product of genetics and heredity, and the races were almost separate from each other, following different paths of evolution (and therefore different levels of humanity). Lovecraft was hardly alone in using this now-discredited science to prop up his notions about “mongrels.” But even scientists and intellectuals of his time were moving far past these theories from the 19th century.

Lovecraft continued to speak of race over the years, and, in 1933, he wrote to J. Vernon Shea:

The problem of race and culture is by no means as simple as assumed either by the Nazis or by the rabble-catering equalitarian columnists of the Jew-York papers. Of course Hitler is an unscientific extremist in fancying that any racial strain can be reduced to theoretical purity, that the Nordic stock is intellectually and aesthetically superior to all others, and that even a trace of non-Nordic blood–or non-Aryan blood–is enough to alter the psychology and citizenly potentialities of an individual . . . . But the anti-Hitlerites are too cocksure when they maintain that the fallacy of theses points justifies a precisely opposite extremism . . . . Anybody can see for himself the difference between a tall, straight-nosed, fine-haired dolichocephalic Teuton or Celt (be he blond or dark) on the one hand, and a squat, swarthy Latin, aquiline Semite, or brachychephalic Slav on the other hand . . . . It is of course true that the cultural heritage is more influential than the biological, but only a freakish extremist would reduce the biological to neglibility . . . . The races are equal, but infinitely different–so that the cultural pattern of one is essentially unadaptable to any other. The ancient civilisation of China is not inferior to ours–yet it could not possibly suit us, any more than ours could suit a race of essentially Mongol descent.

While Lovecraft still appealed to outmoded science (note all the references to skull shape and size), he appears to have switched emphasis here and elsewhere to cultures as the main point of contention. These are what should not be mixed.

Despite this shift, premier Lovecraft scholar S. T. Joshi claims that he believed in the biological inferiority of black people (and “Australoids”) until he died. Lovecraft also maintained his sympathies for the Southern side of the Civil War. He did, however, repudiate the Ku Klux Klan, which he had previously approved of, and his initial admiration for, if not full support of, Hitler seems to have evaporated.

Some champion the idea that Lovecraft actually recanted his racism at the end of his life, but I see no real evidence of it. He may have realized that his scientific justifications for his views were wanting, but he merely admitted that his personal tastes were for an unsullied Anglo-Saxon culture-stream. To some extent, he admitted that he valued the “Nordic” above all else because it suited him, in much the way he liked a fine antique chair. He knew, ultimately, that he had a choice in admiring ancient Rome or Georgian England. He may not have fully realized that he had some say in how he regarded other human beings.

When he wrote that letter to Shea, he was forty-three years old. He died less than four years later. If his views on race changed so little over three decades, how much can we expect them to had he lived longer? Would the Civil Rights Movement have really moved him, while he would be in his sixties and seventies? Again, as much as we might hope he would have changed, I have serious doubts. We, of course, will never know for sure.

And as it is, I may be giving Lovecraft too much credit. Fred Ludnow recently wrote an article on his blog, Lovecraftian Science, entitled “H.P. Lovecraft and the Pseudoscientific Study of Racism,” which states that Lovecraft’s scientific views regarding race never really changed (this is basically Joshi’s position as well). Ludnow surely has a better understanding of the matter than I do; perhaps Lovecraft’s backpedaling was mere rhetoric. Nonetheless, Ludnow’s frustration with Lovecraft’s myopia in this one area aligns with mine.

I have a bit more to say about the legacy of Lovecraft’s racism, which I will post soon.

4 thoughts on “Lovecraft in His Grave, Pondering Race”